The Module has all of the base classes in 5th edition included! Artificer and the other classes outside of the base book may be done in the future.  The donations are split between the artist (@Tallinier) and I and helps get more art sooner than later! It comes in PDF form.

This module is made with the preference of rather than getting statistic changes from races it comes from classes instead in 5th Edition. This is to make the class choice both narrative and statistical rather emphasize that bonus through race so that a human ranger can be just as good as an elven ranger. This does NOT exist to change emphasis that certain cultures have a preference over classes but instead to diversify it a bit.

**DISCLAIMER**: THIS IS NOT A CORRECTION. THIS IS A PREFERENCE AND ALTERNATIVE.

Really excited to be using this in my next campaign! One of my players is hoping to be an artificer, do you still think you might do that one at some point?

Unfortunately, the Artificer Class is not in the 5E SRD which means it's still protected by copyright and it may not be able to get added here! If that changes in the future it may make the list one day!

Sorry, just pointing out grammatical error, should be "The donations are split between the artist (@Tallinier) and me" - intriguing work BTW

Do you have the opportunity to add a survey for Artificer players?

This is nice, I rather like the idea and the presentation in the PDF, thank you!

Any suggestions on how to incorporate this module into DnDBeyond?

PS -- there are several typos in the PDF.  The first one that jumped out at me was for Barbarian's 2nd step: "Do you have the ability you would boast".  I believe the word should be "boost" rather than "boast".

I'm not sure that one is a typo. I think you'd read it as "Do you have [talent that you'd brag about ] when it comes to throwing at a distant target [...]".

This looks really cool. I can't wait for what you do with the Artificer, and maybe the Blood Hunter if you do. Might come up with my own ideas for them as well as any other homebrew classes that I use or make. Keep up the good work 👍

Thank you so much for this! Hope you get much more visibility, more people need to see it!

It is strongly worded that this replaces an ability score increase given by a race. Does that mean that racial ability score decreases are still in effect?

I think it's safe to say: definitely not. It's probably just because virtually no race has ability score decreases.

This is very cool! I do worry it unbalances the half-elf and human, since part of the package there are the extra ability scores. Mountain dwarf also comes to mind. A half-elf or mountain dwarf gets 4 total ability score points, whereas most races get 3, and the non-variant human usually gets 6 total points. With this ruleset, these races would become slightly weaker. On the flip side, the variant human now has an extra point on top of the feat, making the non-variant human is even less appealing for play and adding to the variant human's power (which is already a top-tier race and needs no additional boost of this sort).

I think there is some work to do to rebalance any races who would not net 3 total points under the standard system. You get around this problem by allowing a player to choose standard OR this system, but I think it leaves a few of the races less potent, since some races have more racial ability scores than others in lieu of other racial traits. (Plus this makes the variant human even more unbalanced). I'd add an optional rule that this system replaces 3 points from the racial ability score increase, not the whole thing, as a possible fix. Maybe also stipulate something for variant human to stop them from being even more op.

This is the kind of bootstrap development I am keen to see done where rules as they are seem to make little or no sense. E.g. At first level a bard gets a number of inspirations equal to their charisma modifier, At first level a Barbarian gets a number of rages equal to 2, up to 8th level. Why not equal to their Constitution mod? Why are some class abilities tied to stats that characters can change or improve but others arbitrary numbers?

I wonder how much of it comes  down to each base stat actually trying to fill in for 2 values, Dexterity = Agility and Dexterity*, Charisma = Leadership/inspiration and Appearence, Strength = might & wierdly endurance which constitution also infringes on with health/vitality and endurance.

*A Deer is agile but plainly not dexterous. A wheelchair bound gnome watchamker is dexterous and not likely agile. You cannot have a clumsy rogue who is an expert lockpicker.

I love the concept of this whole project.
I did wonder though:
Are there plans to add art for Cleric and Paladin on a later update?
Those are the only two classes without art at the moment, which does pull attention to that face compared to the other <very well-crafted> art for the classes herein.

I love these. They're wonderful. I can't wait until it's completed.

I wanted to mention that it seems the second step text for the Fighter seems be for a Rogue based on the text.

You should share this product in this relevant thread in the itch.io forums too! https://itch.io/t/420311/share-your-projects-dd-ogl

The "How to use this plugin" sections second sentence doesnt seem to finish its thought? "Racial abilities, such as the elves Fey Ancestry or Trance." I might just be misunderstanding but I thought Id mention.

Really enjoying this tho. Looking forward to future changes and updates. 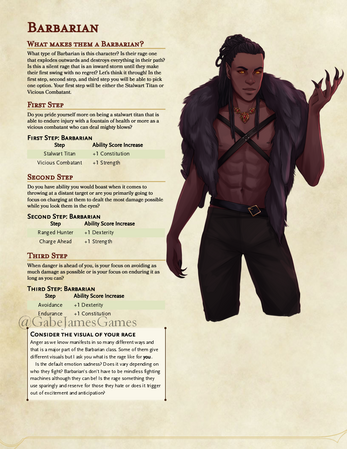